WHAT IS A DNS ZONE? DNS ZONES EXPLAINED

A domain name consists of one or more parts, technically called labels, that are conventionally concatenated, and delimited by dots, such as example.com. Any name registered in the DNS is a domain name. Domain names are organized in subordinate levels (subdomains) of the DNS root domain, which is nameless. The first-level set of domain names are the top-level domains (TLDs), such as com and org. Below these top-level domains in the DNS hierarchy are the second-level and third-level domain names that are typically open for reservation by end-users who wish to connect local area networks to the Internet.

A fully qualified domain name (FQDN) is a domain name that is completely specified with all labels in the hierarchy of the DNS, having no parts omitted. Labels in the Domain Name System are case-insensitive.

When looking at how an FQDN is resolved to find the IP address that relates to a particular system, read the name from right to left, with each level of the hierarchy divided by periods (.). In this example, com defines the top level domain for this FQDN. The name example is a sub-domain under com, while sales is a sub-domain under example. The name furthest to the left, bob, identifies a specific machine hostname.

Except for the hostname, each section is called a zone, which defines a specific namespace. A namespace controls the naming of the sub-domains to its left. While this example only contains two sub-domains, an FQDN must contain at least one sub-domain but may include many more, depending upon how the namespace is organized.

The DNS nameserver is a server that maintains the name and IP information for a domain. You can have a primary DNS server for master zone, a secondary server for slave zone, or a slave server without any zones for caching.

Zones are defined on authoritative nameservers through the use of zone files (which describe the namespace of that zone), the mail servers to be used for a particular domain or sub-domain, and more.

A nameserver may be one or more of these types. For example, a nameserver can be a master for some zones, a slave for others, and only offer forwarding resolutions for others.

Stores original and authoritative zone records for a namespace, and answers queries about the namespace from other nameservers.

Answers queries from other nameservers concerning namespaces for which it is considered an authority. However, slave nameservers get their namespace information from master nameservers.

Offers name-to-IP resolution services, but is not authoritative for any zones. Answers for all resolutions are cached in memory for a fixed period of time, which is specified by the retrieved zone record.

BIND as a Nameserver

BIND performs name resolution services through the /usr/sbin/named daemon (a daemon is a program that runs continuously and exists for the purpose of handling periodic service requests). BIND also includes an administration utility called /usr/sbin/rndc.

BIND stores its configuration files in the following locations:

The named.conf file is a collection of statements using nested options surrounded by opening and closing ellipse characters, { }. Administrators must be careful when editing named.conf to avoid syntax errors as many seemingly minor errors prevent the named service from starting.

A typical named.conf file is organized similar to the following example:

The following types of statements are commonly used in /etc/named.conf:

The acl statement (or access control statement) defines groups of hosts which can then be permitted or denied access to the nameserver.

In this statement, replace acl-name with the name of the access control list and replace match-element with a semi-colon separated list of IP addresses. Most of the time, an individual IP address or IP network notation (such as 10.0.1.0/24) is used to identify the IP addresses within the acl statement.

The following access control lists are already defined as keywords to simplify configuration:

When used in conjunction with other statements (such as the options statement), acl statements can be very useful in preventing the misuse of a BIND nameserver.

The following example defines two access control lists and uses an options statement to define how they are treated by the nameserver:

The include statement allows files to be included in a named.conf file. In this way, sensitive configuration data (such as keys) can be placed in a separate file with restrictive permissions.

An include statement takes the following form:

In this statement, file-name is replaced with an absolute path to a file.

In this statement, the option directives are replaced with a valid option. The following are commonly used options:

A zone statement defines the characteristics of a zone, such as the location of its configuration file and zone-specific options. This statement can be used to override the global options statements. A zone statement takes the following form:

In this statement, zone-name is the name of the zone, zone-class is the optional class of the zone, and zone-options is a list of options characterizing the zone.

The zone-name attribute for the zone statement is particularly important. It is the default value assigned for the $ORIGIN directive used within the corresponding zone file located in the /var/named/ directory. The named daemon appends the name of the zone to any non-fully qualified domain name listed in the zone file.

For example, if a zone statement defines the namespace for example.com, use example.com as the zone-name so it is placed at the end of hostnames within the example.com zone file.

The most common zone statement options include the following:

The following is an example of a zone statement for the primary nameserver hosting example.com (192.168.0.1):

In the statement, the zone is identified as example.com, the type is set to master, and the named service is instructed to read the /var/named/example.com.zone file. It also tells named not to allow any other hosts to update.

A slave server’s zone statement for example.com is slightly different from the previous example. For a slave server, the type is set to slave and in place of the allow-update line is a directive telling named the IP address of the master server.

The following is an example slave server zone statement for example.com zone:

Zone files contain information about a namespace and are stored in the named working directory (/var/named/) by default. Each zone file is named according to the file option data in the zone statement, usually in a way that relates to the domain in question and identifies the file as containing zone data, such as example.com.zone.

All directives and resource records should be entered on individual lines.

Comments can be placed after semicolon characters (;) in zone files.

Directives begin with the dollar sign character ($) followed by the name of the directive. They usually appear at the top of the zone file. The following are commonly used directives:

The primary component of a zone file is its resource records.

There are many types of zone file resource records. The following are used most frequently:

Seen individually, directives and resource records can be difficult to grasp. However, when placed together in a single file, they become easier to understand.

In this example, standard directives and SOA values are used. The authoritative nameservers are set as dns1.example.com and dns2.example.com, which have A records that tie them to 10.0.1.1 and 10.0.1.2, respectively.

The email servers configured with the MX records point to mail and mail2 via A records. Since the mail and mail2 names do not end in a trailing period (.), the $ORIGIN domain is placed after them, expanding them to mail.example.com and mail2.example.com. Through the related A resource records, their IP addresses can be determined.

Services available at the standard names, such as www.example.com (WWW), are pointed at the appropriate servers using a CNAME record.

This zone file would be called into service with a zone statement in the named.conf similar to the following:

Configuring the Hosts and Hostname

The Hosts tab allows you to add, edit, or remove hosts from the /etc/hosts file. This file contains IP addresses and their corresponding hostnames.

There are three classes of hostname: static, pretty, and transient.

The “static” host name is the traditional hostname, which can be chosen by the user, and is stored in the /etc/hostname file. See the definition above (A hostname is a name which is given to a computer whne attached to the network. Its main purpose is to uniquely identify over a network.). It should look like this:

Another Definition of Hostname

A network host is a computer or other device connected to a computer network. Specifically, computers participating in the Internet are called Internet hosts, sometimes Internet nodes. Internet hosts and other IP hosts have one or more IP addresses assigned to their network interfaces.

A network domain is an administrative grouping of multiple private computer networks or hosts within the same infrastructure. Domains can be identified using a domain name;

Today, the Internet Corporation for Assigned Names and Numbers (ICANN) manages the top-level development and architecture of the Internet domain name space. It authorizes domain name registrars, through which domain names may be registered and reassigned.

The domain name space consists of a tree of domain names. Each node in the tree holds information associated with the domain name. The tree sub-divides into zones beginning at the DNS root zone. 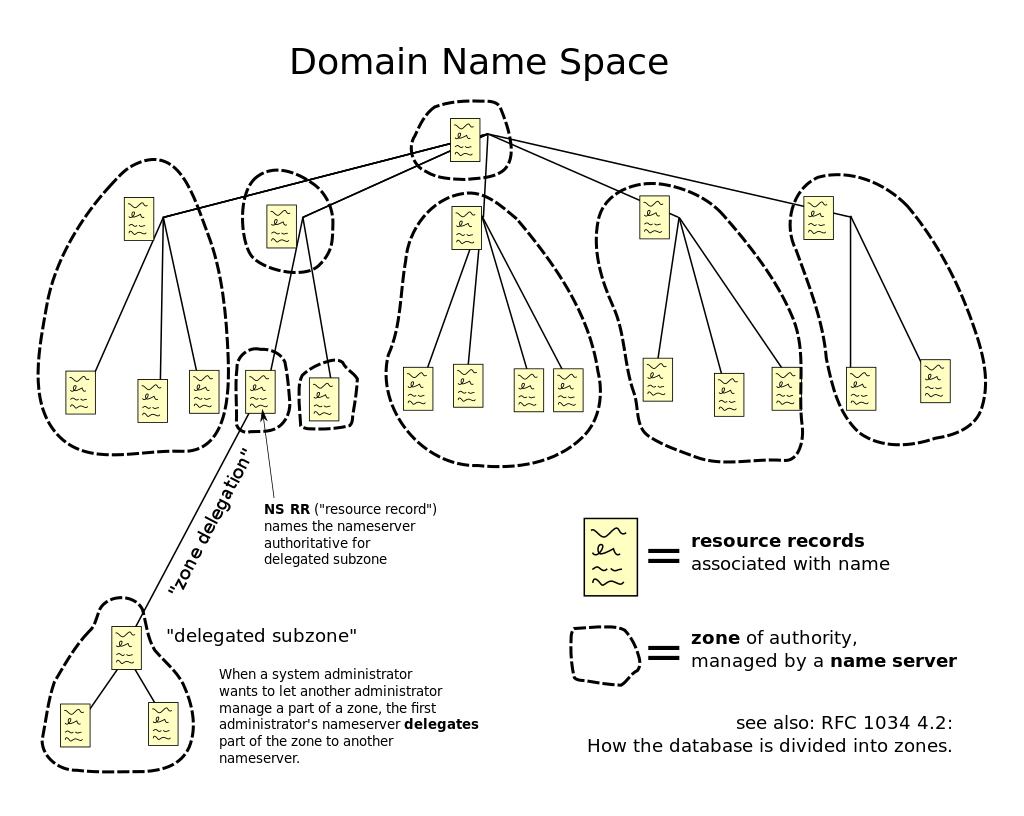 A domain name consists of one or more parts, technically called labels, that are conventionally concatenated, and delimited by dots, such as example.com.

Another Definition of DNS Zone

A DNS zone is any distinct, contiguous portion of the domain name space in the Domain Name System (DNS) for which administrative responsibility has been delegated to a single manager.

The domain name space of the Internet is organized into a hierarchical layout of subdomains below the DNS root domain. The individual domains of this tree may serve as delegation points for administrative authority and management. However, usually it is furthermore desirable to implement fine-grained boundaries of delegation, so that multiple sub-levels of a domain may be managed independently. Therefore, the domain name space is partitioned into areas (zones) for this purpose. A zone starts at a domain and extends downward in the tree to the leaf nodes or to the top-level of subdomains where other zones start.

The record is information about name and IP address. Some special records are: